The following image is a screen capture of how a SonarTRX image overlay may look when viewed by the Google Earth Pro, the desktop application. These images can be created from supported sidescan sonar systems. The images may also be imported into other applications such as QGIS, ESRI GIS products, Global Mapper, Manifold GIS and others, by turning on the option to generate geo-referencing files along with each image. 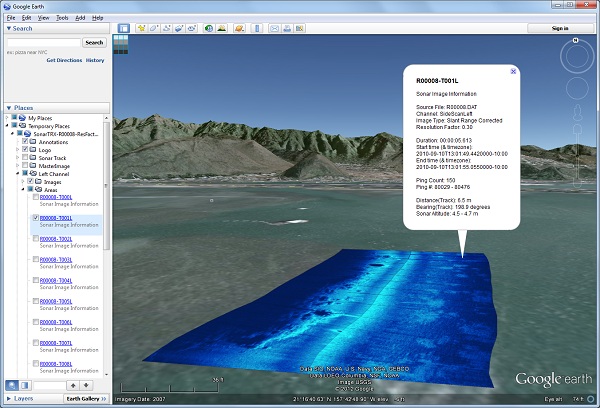 The SonarTRX mosaic folders can also be uploaded to a web-server with FTP and displayed using the Google Earth Pro Desktop application, via a link to the kml file:

Sharing of SonarTRX images and/or coverage areas via a kml file on the server:

Sample coverage areas only (no KML GroundOverlays) (link to a doc.kml file)

If Google Earth Pro (the desktop application) is installed, the above link provides option to Open the file for viewing. The SonarTRX doc.kml files has folders for starboard/port channel and sub-folders for image tiles and sonar coverage areas. When the sonar coverage aras (polygons) are visible, a popup-windows can be shown by clicking on each image-tile. The dedicated "Annotations" folder can be used to add KML placemarks, lines and markers associated with the images. These can easily be transferred back to the sonar or nav-display in the form of GPX waypoints, routes or tracks, using the SonarTRX kml-gpx conversion-tools.